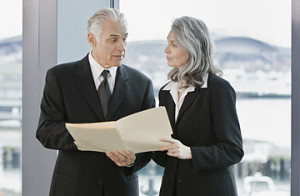 As a career transition specialist in Calgary I am seeing many people struggle with the notice that they are no longer employed. The individuals I work with who are 50 and over are often particularly concerned that they won’t get re-hired because of their age. They express concerns about: being discriminated against, not valued, being seen as not able to work with a younger workforce or learn as quickly, or feel they are just at a general disadvantage because of their age. While I do believe discrimination exists, what I see more often is that an individual is actually more likely to be valued at this stage in their career. To relieve some of the concerns I commonly hear I want to debunk some of the career transition myths that those in the 50 plus age bracket share with me and say, “don’t worry you won’t be ‘put out to pasture.’”

Myth 1: Companies will hire younger people as they can stay with the company longer.

Reality: People are working for shorter periods of time for a single company, and hiring practices reflect this.

It was only a generation or two ago that people would work their entire career at one company, or in one role, but this is no longer the case. This is now becoming the exception. Therefore, the appeal of hiring someone young so they stay with a company for an extended period of time no longer exists. In fact, things are changing so rapidly that a job you gain today will likely change over the course of the next 5 to 10 years, so companies are often hiring with this shorter term mindset.

In addition to this, the notion of “freedom 55” is long gone for most. While Canadians may be able to gain their pension at 65 there are incentives for Canadians to start collecting from the Canadian Pension Plan funds at a later age. This is a reflection of society’s changing view of continuing in the workforce until much later in life.

Reality: Working on a contract, short term, or part time basis may be an employer’s preference.

Many employers have expressed the need for highly qualified people to work on a more flexible basis, especially in today’s climate as companies are facing economic uncertainty and are reluctant to commit to hiring full time employees. For people who have had more time in the workplace and are interested in continuing work, but reducing their hours, this can be an ideal arrangement.

Myth 2: You are less desirable to employers as you get older.

Reality: The 50+ group can be seen as offering more experience for less money.

Another trend I have witnessed here in Calgary is that employers have had to reduce wages, but are still attracting individuals who have significant work experience. Human resources people are wise to the fact that those who have been productive workers for an extended period of time continue to possess the same drive and may be willing to work at a slightly reduced salary. For many staying employed is a better alternative than staying at home where you can only do so many home projects before you need to get out of the house.

Reality: The companies you want to work for are those that recognize good talent.

I recently started a contract role and was one of four new consultants. As the others introduced themselves, I actually felt very underqualified, even though I have 20 years of relevant experience. They had all worked at director level or vice president roles, and had highly distinguished careers, but despite this, half of the group had recently been laid off due to the economic downturn. The VP Talent Management and Development, had recognized an opportunity to recruit individuals to this developing business and utilize them as contractors; an opportunity that wouldn’t have existed a year ago. My point is that companies are looking at scooping up knowledge and experience they couldn’t feasibly have got their hands on before. It means both parties can work together happily to create new opportunities for themselves.

Myth 3: People will just look at me and focus on my age.

Reality: Employers want healthy and productive employees regardless of their age.

I recently read a great article that dispelled the notion that if you are biologically older then you are less desirable to an employer. We know that our population is living longer, and with more knowledge regarding how to maintain our health, many individuals have done just that. At any age people can be physically and mentally healthy. What potential employers care most about is that you will be an active and contributing employee. If you are mentally and physical healthy and vibrant, this is what people will notice in an interview, not your chronological age. This is certainly something we can all work on at any age to be more appealing to potential employers, and to stay resilient through a career transition.

Reality: If you were recently laid off then you would have had to keep up with technology and increasing demands in the workplace.

While some may notice that with age, their short term memory is not what it used to be, we typically have more self management skills that make-up for potential short falls. Unless you have a chronic mental illness, you can still learn and function effectively. Also, if you have been employed up until recently, employers will recognize that you have the ability to add value to their organization.

My message, “You are still fabulous over 50 and employers recognize this! You just have to do the same!”

Book a complimentary 15-minute consultation or your first session