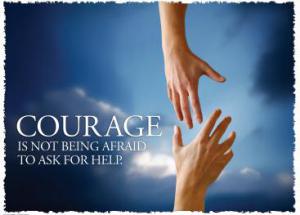 Men are 50% less likely than women to consult a health care provider to address emotional difficulties according to the Canadian Community Health Survey Cycle (2006). This being said, how can we learn to find strength in vulnerability?

As a counselling psychologist who works with men, this has made me think about the ways in which our cultural conception of masculinity makes it hard for men to seek help for any sort of psychological or emotional difficulty. Whether it’s the stressors associated with a demanding job, the frustrations and hardships that can accompany challenges in an intimate relationship, or the dis-ease that can emerge when one’s life isn’t on-track, men tend to be reluctant to reach out for support. Traditional male role socialization prescribes boys and men to be strong, tough, and autonomous. “Don’t be sissy”, “boys don’t cry” and “man-up” are common messages this strict gender script conveys. If they stray from the socially prescribed male role by disclosing their fears, hurts, or challenges to others, they are often at risk of criticism or mocking. Vulnerability is considered weak and weakness is shunned says the script, despite the universality and inevitability of this experience.

Typically, men are socialized in a way that, when something’s wrong, they are the ones who are supposed to “fix it”. This can put a lot of pressure on men. They often fear admitting to another person let alone a psychotherapist who they’ve just met, that they may be stuck.

Help-seeking too at times can result in feeling an emotional connection with the helper. Developing a therapeutic relationship can be an important and helpful tool in addressing one’s concerns in psychotherapy.  Connection can result from these authentic encounters; something that is a natural, adaptive human experience. Yet, connection is typically associated with things feminine, and anything feminine is to be avoided says the script. No wonder men are so reluctant to seek help in dealing with emotional difficulties. Seeking help typically involves qualities they are strongly socialized against.

Further, men are encouraged to be action-oriented; they are the “doers” often channeling their energy towards achieving success. Veering away from the script through paying attention to the inside world of their sensations, thoughts and feelings is not often encouraged. This may be why they sometimes neglect seeking medical and psychological attention – they may not be focused on these aspects and may thus be unaware of the severity of the difficulties they may be experiencing.

In fact, many men struggle with alexithymia, a term that refers to the difficulty associated with being able to label their emotions. As a result, men may have difficulty understanding and articulating what’s going on for them. When invited to check-in and pay attention to their feelings, and then not know what they are feeling or how to define it, can in itself be anxiety-provoking, especially when they’re told they’re the ones that should have the answers. It perhaps is no surprise that men have higher rates of substance abuse than women; it’s a coping mechanism that at the same time allows them to save-face by not needing to consult outside help. Yet it also illustrates how they may suffer privately in search of some kind of relief.

Research supports how psychotherapy can be helpful for men. Yet as noted above, many men are often reluctant to access it. Levant, a leader in the field of the psychology of men and masculinity, talks about the importance of recognizing the strengths that men bring to the psychotherapy table as well. Qualities such as logic, problem-solving skills, and motivation towards action, can contribute to the process of psychotherapy in a productive manner. A therapeutic environment where men are not shunned for being vulnerable, but instead encouraged to connect with a range of experiences can also help to make it less intimidating for men to take steps to help themselves.

Ultimately, seeking help requires a tremendous amount of strength and courage. Through re-framing vulnerability as a courageous act as opposed to a weakness can hopefully make seeking help a safer option for men to consider.

Levant, R. F. (2003) Men and boys: what happened to emotions? Retrieved May 18, 2012, from: http://www.apadivisions.org/division-31/publications/articles/new-york/levant.pdf

Book a session with us! Please note we are not taking new clients at this time