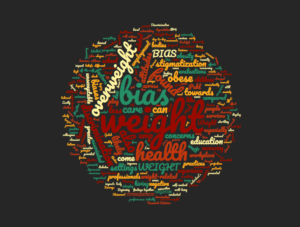 WHAT IS WEIGHT BIAS?

As much as we have labelled various forms of discrimination – racism, sexism, and classism, to name a few – completely unacceptable, the stigmatization of those who are overweight or obese persists to an astonishing degree. From overt jokes and degradation towards those living in larger bodies, to covert hiring practices and barriers to accessing healthcare and other services, weight bias is sadly still alive and well in the year 2018. Such prejudices have lasting effects. Shame, anxiety, depression, low self-esteem, and body image concerns are all associated with weight bias.

WHAT ARE THE NEGATIVE CONSEQUENCES OF WEIGHT BIAS?

Beginning in childhood, those who are overweight are at increased risk of facing discrimination. In fact, “anti-fat” attitudes have been found to be present in children as young as 3 years old (Cramer & Steinwert, 1998). In school settings, overweight children experience stigmatization not only from their peers, but also from their teachers. One study found that 28% of teachers believed that “becoming obese was the worst thing that would happen to a person” (Neumark-Sztainer et al., 1999). Discrimination like this has been found to persist from early education, all the way through high school and university, and into the workplace.

In work settings, weight bias has an impact on everything from hiring practices to termination. A review of almost 60 studies was conducted to examine the effect of weight bias on workplace evaluations across every stage of the employment process (Rudolph et al., 2009). They found that not only were those deemed to be overweight less likely to be hired initially, they were also more likely to receive negative performance evaluations and less likely to be promoted, compared to their non-overweight colleagues.

Lastly, in health care settings, health professionals commonly display weight bias towards patients who are overweight or obese. Surveys have found that such professionals believe obesity can be prevented through more self-control and less laziness (Maroney & Golub, 1992). This is especially concerning given that a large proportion of those with weight concerns are in frequent need of accessing health care services due to related chronic health problems such as diabetes and hypertension (Peirson et al., 2014). These biased attitudes mean that reduced quality of care and poorer health outcomes are a startling reality for those with obesity (Phelan et al. 2015).

It should also be noted that many other factors come into play when looking at the prevalence of severity of weight bias across different groups of people. Women consistently experience more weight-related discrimination than men, especially those who are obese compared to those who are overweight (Puhl et al., 2008). Race and education aside, people who are younger also face greater discrimination due to their weight. Ethnic minorities are at greater risk as well. All of these biases mixed together create a complex interplay of factors to address when trying to target or reduce them.

WHAT TO DO ABOUT WEIGHT BIAS?

Despite the negative consequences associated with weight bias, recently there have been some positive findings related to reducing it. Weight-biased attitudes and beliefs can be changed through interventions that promote acceptance and understanding that bodies come in all shapes and sizes (Lee et al., 2014). It’s hopeful to think that those with weight biases can improve their viewpoints when provided with a more objective perspective on weight and all of the stigmatization surrounding it.

On an individual level, weight bias is something for all of us to consider and check ourselves when we notice it come into play in our day-to-day lives. From off-the-cuff comments and internalized thoughts about weight-related concerns, to observing weight bias directed towards others in our environments, the more of us that stand up and say that it is unacceptable, the likelier we are to get rid of these biases altogether.

Book a session with us! Please note we are not taking new clients at this time